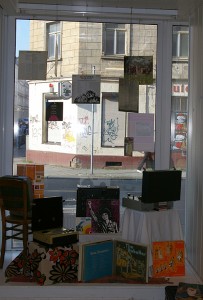 For October in the store we are focusing on the roll of music during the GDR. All forms of media were contested in East Germany, but it often seems to me like music more so than others. Perhaps this was because it often still took a bit of work to acquire “western” music, making it all the more desirable.

To set the mood, we set up a window display with record players and reel-to-reel players as well as a selection of records from the state sanctioned record labels (Amiga, Schola, Litera and Eterna). 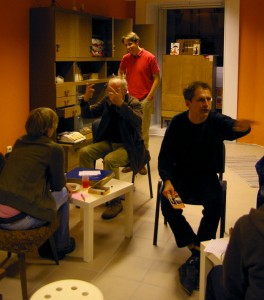 For the event itself, we invited people to bring a song that was important for them during the GDR, whether it came from a performer from East Germany or somewhere else. The final group or songs included selections by the Puhdys and Karat as well as Supertramp and Melanie.

We had a small group, but the discussion was very lively, ranging from the merits of various musical acts (in their various incarnations) to the “music scene” in the GDR to more philosophical discussions about both.
I actually had to interrupt the discussion so that we could play the songs people had written down. Thanks to the Internet, we could locate recordings of just about everything requested. Here we watch the Puhdys performing “Das Buch.” 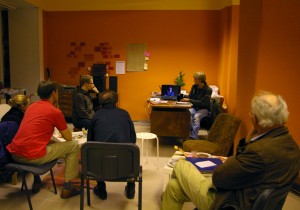